Dexter is 2 and a half years old and has been part of our family for 18 months. As a pup he was returned to his breeder at 8 months old as his attachment to his previous lady owner caused great jealousy from her husband.

From a loving owner back to a competitive kennel life, this badly affected his behaviour as did his apparent mistreatment that revealed itself by certain of his reactions to some everyday situations. To say that he was aggressive towards other dogs and hadn’t a clue with regard to acceptable behaviour is an understatement. Pushing the boundaries was his favourite pass time

Then I was put in touch with Jenkins Canine Services where I was taught how to communicate with and to trust and understand Dexter. Within 6 months he and our relationship had changed beyond recognition.

He has now passed both his Bronze and Silver Kennel Club Certificates and, so it is said, could go for Gold!

Although he is still work inprogress I could not ask for a more sociable and well-balanced friend who is a total pleasure to be with both in the home and out on and off lead walks with other dogs. I am convinced that if we had not found Jenkins Canine Services, then Dexter would have found himself back to his breeding kennel and all the unhappiness that he experienced there!

Thank You Sarah and Colleagues who have made this all possible.

Jenkins Canine Services,” Where Every Dog Matters” just like it says on the van! 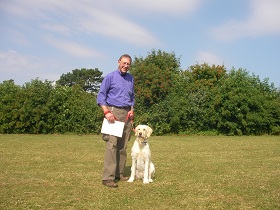